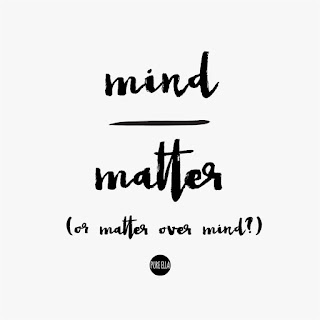 Mind over matter or matter over mind? As a “normal” person pre flox I believed in mind over matter however as a floxie with chronic health issues I’ve had to learn to listen to my body as my mind always thinks I can do more than I can or at least it used to. So for the floxed its matter over mind and adjusting to that way of thinking can be hard to do.

I have a T shirt with mind over matter printed on it. As a floxie living with FluoroQuinolone Associated Disability (FQAD) it’s something I’ve tried to do. I’ve always been a glass is half full person and living with FQ toxicity is no different. I do my best to think positively as I know our bodies are miraculous in their ability to heal. The reality with FQAD is that mind over matter usually doesn’t work. More frequently it’s a case of matter over mind.

It’s unfortunate because many floxies are told by loved ones to push through it or they are told if they get up and get moving they’ll feel better. As a floxie I wish it was that simple. I’ve tried pushing through the pain and weakness only to suffer more. Those of us that have been dealing with this for years tell newcomers to listen to their bodies and caution against pushing themselves mostly because we’ve been there, tried it, and it didn’t work.

There’s another side to the “mind over matter” that those who love us often don’t see which is when a loved one tells us to just get up and do something how much emotional pain and hurt that causes us. Over the years I’ve been in the support groups I’ve seen far too many posts by floxies who are devastated when someone they love says this to them. The common thread for those of us suffering is that if we could push through it we would. It’s hard when those closest to us don’t understand this. Not to mention that we are devastated by the knowledge that we can’t. When I was healthy before I took cipro I could push through when I didn’t feel great. I can remember having an ache, pain or feeling fatigued and going jogging or to an exercise class and working through it. However FQAD is different.

Having lived with Fluoroquinolone toxicity for almost a decade now I wish it was as simple as mind over matter or just pushing through it. I would ask those that think we can if they would tell someone with ALS, MS, Lupus, arthritis and/or Parkinson’s the same thing. I don’t think they would because most people understand how debilitating these diseases are. I’m here to tell you that FQAD is similar in that it is a multi system full body toxicity. It can and often does affect our entire nervous system, musculoskeletal system, digestive system, endocrine system, and our joints, tendons, nerves, skin, bones, hearing, vision, memory, adrenals, liver, kidneys, lungs, and more.

If you or someone you love is suffering from Fluoroquinolone toxicity while it’s important to think positively because there are things you can do to improve such as going organic please remember that pushing yourself to do more physically might not be the best way to go. In this case matter over mind is usually better. Always listen to your body, trust yourself, and do what is right for you. If you’re a caregiver please remember that we’re doing the best we can, that some days are better than others, and that if we were able to do so we’d much rather be out and about actively enjoying ourselves. So please be compassionate because FQAD is a serious and debilitating toxicity and those of us living with it are doing the best that we can.
Posted by Betsy at 8:56 AM 2 comments: