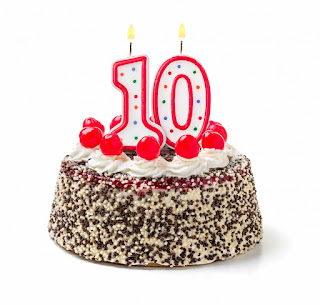 What is a decade? A decade can be viewed as ten years, 120 months, 520 weeks, 3,652 days, or 87,648 hours. If you’re young it might seem like a life time. Tell a 7 year old that wants a bike that they have to wait ten years and you probably won’t like their response. Even to a middle aged or elderly person it’s significant. No matter how you look at it, it is a considerable amount of time.

Well I was floxed ten years ago and it’s a considerable amount of time for me too. It’s a long time to be fighting chronic health issues. It’s a long time to endure pain and to struggle. It’s also a long time to learn something new and that’s what I’ve spent countless hours doing. I’ve researched and learned about safe alternatives to prescription and over-the-counter medications. I’ve learned how to live a healthier lifestyle, help others to do the same, and I share my knowledge. I’ve learned to be my own advocate and to not blindly trust doctors.

It daunting to think of how much I’ve lost during that time. All those hours, days, weeks, months and years that I’ve lived with pain and disability when I could have been doing so much. I could’ve been a stronger more present mother, wife, sister and daughter. I could’ve continued enjoying the things I did before suffering from FQAD such as snow and water skiing, jogging, taking pilates and exercise classes, swimming and more. So it’s with this realization that I will not go back and spend time mourning what I’ve lost and I will instead focus on what I’ve gained.

I’ve gained compassion for others because we truly never know what others are going through. I’ve gained knowledge that I try to share with others to prevent them from going through what I have. I’ve gained insights that I would’ve never had if I hadn’t lived this way for the past ten years and I’m grateful for all of that and more. It's been a defining decade; of both bad and good for me.

I’m a floxie. I’ve been floxed for ten years now. I suffer floxing and/or FQAD (FluoroQuinolone Associated Disability). However you want to say it, qualify it or name it. Ten years ago I began taking the first pill of a ten day prescription; 500 mgs of ciprofloxacin twice a day. I only took four pills. That’s all it took to change my life forever. It’s my floxiversary and my best advice to stay healthy is to eat for your health. Don’t take your health for granted because you never know when it might change. Eat organic, no processed foods or sugar, avoid added chemicals; avoid pesticides and GMO foods (Genetically Modified Organisms). Eat the way Mother Nature intended us to. Shop the outside of the store. Spend the bulk of your food budget on fruits and vegetables with some good quality organic grass fed protein and your body will thank you for it. You’ll have more energy, fewer aches and pains and a better, stronger immune system to fight off illness.

This advice applies no matter what illness you are suffering and it applies to healthy people too because we never know what our “tipping point” will be. Pesticides like glyphosate can compromise and might shut down our sulfation pathway in the body. This can lead to cancer which is why I recommend organic foods. GMOs are foods whose DNA is genetically altered in a way that could never happen naturally. This is much different than hybrids which are cross pollinated in a way that can occur in nature. That is why many people call GMOs Frankenfoods. The bulk of corn and soy in this country is genetically engineered or GMO which is why I avoid eating them because the truth is very little study has been done on these foods to determine the long term affects  on our health. Processed foods often contain chemicals, flavorings, colorings, and can have added sugar and salt that aren’t good for us. There are ways to prepare healthier options that are quick and easy so choose wisely. For instance adding some fresh squeezed lemon and raw honey to a glass of water is much more refreshing and uplifting than adding a scoop of sugary powdered lemonade mix and it’s healthier too. So I recommend eating like your life and health depends on it because it does.

Betsy
Posted by Betsy at 1:07 PM No comments:

Caregivers for the chronically ill are truly special people. I’ve heard countless stories of those who became disabled only to have their significant other leave them. But there are also many more that stay and take on this important role. But caregivers can also be a parent, sibling, friend and/or neighbor and to those people I say thank you for all that you do for your loved one. I can’t emphasize enough how important it is to have someone support us in our fight to regain our health. The chronically ill are warriors but having support in our battles lightens the load for us.

Having been the caregiver for my family in the past it’s very difficult to relinquish that role to someone else. It’s hard to admit even to myself that there are things I can no longer do.  I fought it for a long time right up until I fell and broke my hip a couple years ago and wound up in a wheelchair. I’m back on my feet now but only because I use a walker. I miss having that role but I do my best to help out when and however I can.

Recently I went away for a couple of days because we were invited to stay with another couple in a similar situation as ours. The wife has health issues not too unlike my own and the two husbands are our caretakers. Like me the wife was very athletic and capable. We both had very similar interests before our health issues took those from us. Both of us were injured by medical professionals but the circumstances are very different. Our spouses on the other hand are still very active and can do all the things we used to do with them. So the two husbands were able to leave for the day to go skiing and I’m happy they had the opportunity to do so. You see it’s important for caregivers to get away now and then and live their life too. They need a break to have fun and enjoy activities that those of us that are ill or disabled can no longer do. I used to call it a mental health day when I would take time out of my routine to do something like going skiing and I think caretakers need that time off too.

As a former caregiver I see both sides of this situation. I miss the days when I could be the one taking care of others. I’m sure that many like me do too. I also see how important it is for my husband to get a break from the routine to do something fun now and then so I do my best to give him those opportunities. I tip my hat to the caregivers of this world especially those that care for a chronically ill loved one. Thank you doesn’t seem to be adequate in this instance for all that they do for their loved ones. But I thank you from the bottom of my heart.